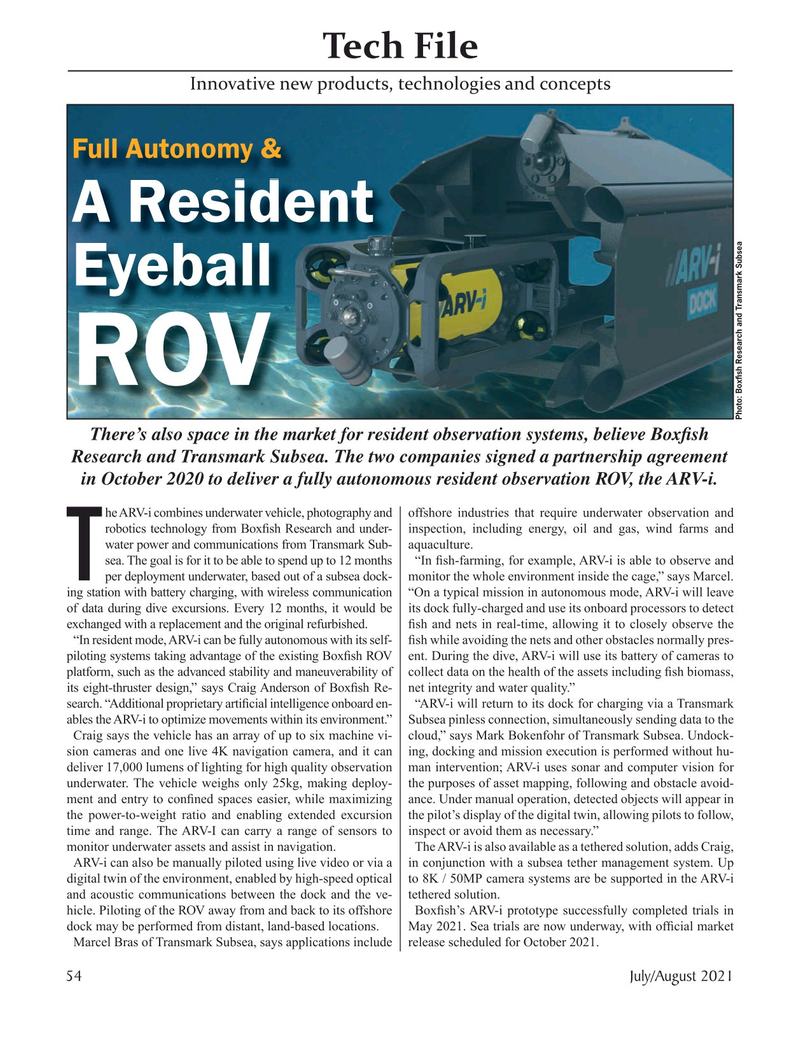 Research and Transmark Subsea. The two companies signed a partnership agreement in October 2020 to deliver a fully autonomous resident observation ROV, the ARV-i. he ARV-i combines underwater vehicle, photography and offshore industries that require underwater observation and robotics technology from Box? sh Research and under- inspection, including energy, oil and gas, wind farms and water power and communications from Transmark Sub- aquaculture. sea. The goal is for it to be able to spend up to 12 months “In ? sh-farming, for example, ARV-i is able to observe and

T per deployment underwater, based out of a subsea dock- monitor the whole environment inside the cage,” says Marcel. ing station with battery charging, with wireless communication “On a typical mission in autonomous mode, ARV-i will leave of data during dive excursions. Every 12 months, it would be its dock fully-charged and use its onboard processors to detect exchanged with a replacement and the original refurbished. ? sh and nets in real-time, allowing it to closely observe the “In resident mode, ARV-i can be fully autonomous with its self- ? sh while avoiding the nets and other obstacles normally pres- piloting systems taking advantage of the existing Box? sh ROV ent. During the dive, ARV-i will use its battery of cameras to platform, such as the advanced stability and maneuverability of collect data on the health of the assets including ? sh biomass, its eight-thruster design,” says Craig Anderson of Box? sh Re- net integrity and water quality.” search. “Additional proprietary arti? cial intelligence onboard en- “ARV-i will return to its dock for charging via a Transmark ables the ARV-i to optimize movements within its environment.” Subsea pinless connection, simultaneously sending data to the

Craig says the vehicle has an array of up to six machine vi- cloud,” says Mark Bokenfohr of Transmark Subsea. Undock- sion cameras and one live 4K navigation camera, and it can ing, docking and mission execution is performed without hu- deliver 17,000 lumens of lighting for high quality observation man intervention; ARV-i uses sonar and computer vision for underwater. The vehicle weighs only 25kg, making deploy- the purposes of asset mapping, following and obstacle avoid- ment and entry to con? ned spaces easier, while maximizing ance. Under manual operation, detected objects will appear in the power-to-weight ratio and enabling extended excursion the pilot’s display of the digital twin, allowing pilots to follow, time and range. The ARV-I can carry a range of sensors to inspect or avoid them as necessary.” monitor underwater assets and assist in navigation. The ARV-i is also available as a tethered solution, adds Craig,

ARV-i can also be manually piloted using live video or via a in conjunction with a subsea tether management system. Up digital twin of the environment, enabled by high-speed optical to 8K / 50MP camera systems are be supported in the ARV-i and acoustic communications between the dock and the ve- tethered solution.

hicle. Piloting of the ROV away from and back to its offshore Box? sh’s ARV-i prototype successfully completed trials in dock may be performed from distant, land-based locations. May 2021. Sea trials are now underway, with of? cial market