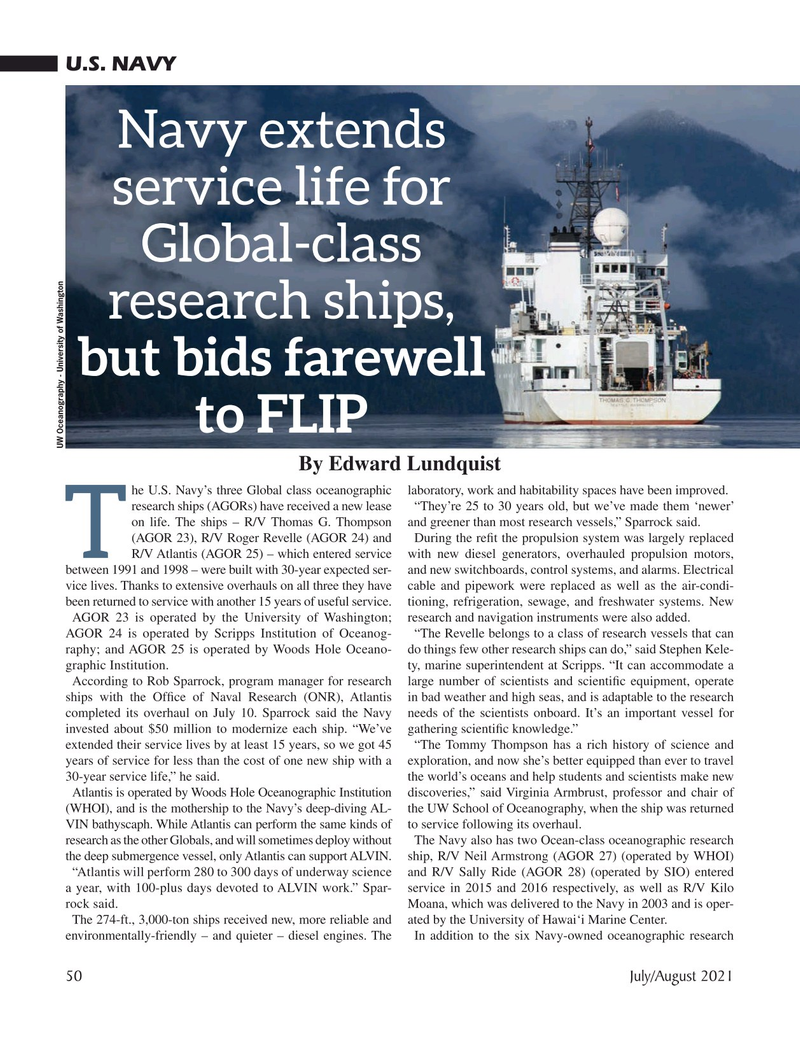 By Edward Lundquist he U.S. Navy’s three Global class oceanographic laboratory, work and habitability spaces have been improved. research ships (AGORs) have received a new lease “They’re 25 to 30 years old, but we’ve made them ‘newer’ on life. The ships – R/V Thomas G. Thompson and greener than most research vessels,” Sparrock said.

(AGOR 23), R/V Roger Revelle (AGOR 24) and During the re? t the propulsion system was largely replaced

T R/V Atlantis (AGOR 25) – which entered service with new diesel generators, overhauled propulsion motors, between 1991 and 1998 – were built with 30-year expected ser- and new switchboards, control systems, and alarms. Electrical vice lives. Thanks to extensive overhauls on all three they have cable and pipework were replaced as well as the air-condi- been returned to service with another 15 years of useful service. tioning, refrigeration, sewage, and freshwater systems. New

AGOR 23 is operated by the University of Washington; research and navigation instruments were also added.

AGOR 24 is operated by Scripps Institution of Oceanog- “The Revelle belongs to a class of research vessels that can raphy; and AGOR 25 is operated by Woods Hole Oceano- do things few other research ships can do,” said Stephen Kele- graphic Institution. ty, marine superintendent at Scripps. “It can accommodate a

According to Rob Sparrock, program manager for research large number of scientists and scienti? c equipment, operate ships with the Of? ce of Naval Research (ONR), Atlantis in bad weather and high seas, and is adaptable to the research completed its overhaul on July 10. Sparrock said the Navy needs of the scientists onboard. It’s an important vessel for invested about $50 million to modernize each ship. “We’ve gathering scienti? c knowledge.” extended their service lives by at least 15 years, so we got 45 “The Tommy Thompson has a rich history of science and years of service for less than the cost of one new ship with a exploration, and now she’s better equipped than ever to travel 30-year service life,” he said. the world’s oceans and help students and scientists make new

Atlantis is operated by Woods Hole Oceanographic Institution discoveries,” said Virginia Armbrust, professor and chair of (WHOI), and is the mothership to the Navy’s deep-diving AL- the UW School of Oceanography, when the ship was returned

VIN bathyscaph. While Atlantis can perform the same kinds of to service following its overhaul.

research as the other Globals, and will sometimes deploy without The Navy also has two Ocean-class oceanographic research the deep submergence vessel, only Atlantis can support ALVIN. ship, R/V Neil Armstrong (AGOR 27) (operated by WHOI) “Atlantis will perform 280 to 300 days of underway science and R/V Sally Ride (AGOR 28) (operated by SIO) entered a year, with 100-plus days devoted to ALVIN work.” Spar- service in 2015 and 2016 respectively, as well as R/V Kilo rock said. Moana, which was delivered to the Navy in 2003 and is oper-

environmentally-friendly – and quieter – diesel engines. The In addition to the six Navy-owned oceanographic research 50 July/August 2021