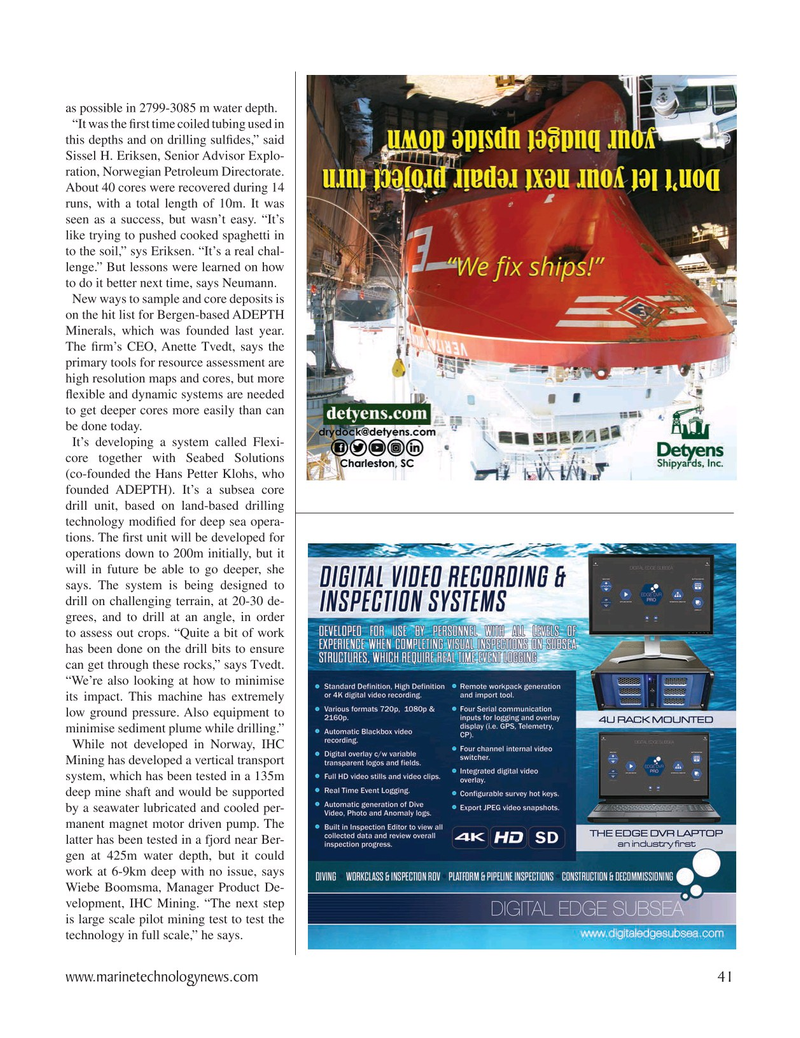 About 40 cores were recovered during 14 runs, with a total length of 10m. It was seen as a success, but wasn’t easy. “It’s like trying to pushed cooked spaghetti in to the soil,” sys Eriksen. “It’s a real chal- lenge.” But lessons were learned on how to do it better next time, says Neumann.

Minerals, which was founded last year.

The ? rm’s CEO, Anette Tvedt, says the primary tools for resource assessment are high resolution maps and cores, but more ? exible and dynamic systems are needed to get deeper cores more easily than can be done today.

It’s developing a system called Flexi- core together with Seabed Solutions (co-founded the Hans Petter Klohs, who founded ADEPTH). It’s a subsea core drill unit, based on land-based drilling technology modi? ed for deep sea opera- tions. The ? rst unit will be developed for operations down to 200m initially, but it will in future be able to go deeper, she says. The system is being designed to drill on challenging terrain, at 20-30 de- grees, and to drill at an angle, in order to assess out crops. “Quite a bit of work has been done on the drill bits to ensure can get through these rocks,” says Tvedt. “We’re also looking at how to minimise its impact. This machine has extremely low ground pressure. Also equipment to minimise sediment plume while drilling.”

While not developed in Norway, IHC

Mining has developed a vertical transport system, which has been tested in a 135m deep mine shaft and would be supported by a seawater lubricated and cooled per- manent magnet motor driven pump. The latter has been tested in a fjord near Ber- gen at 425m water depth, but it could work at 6-9km deep with no issue, says