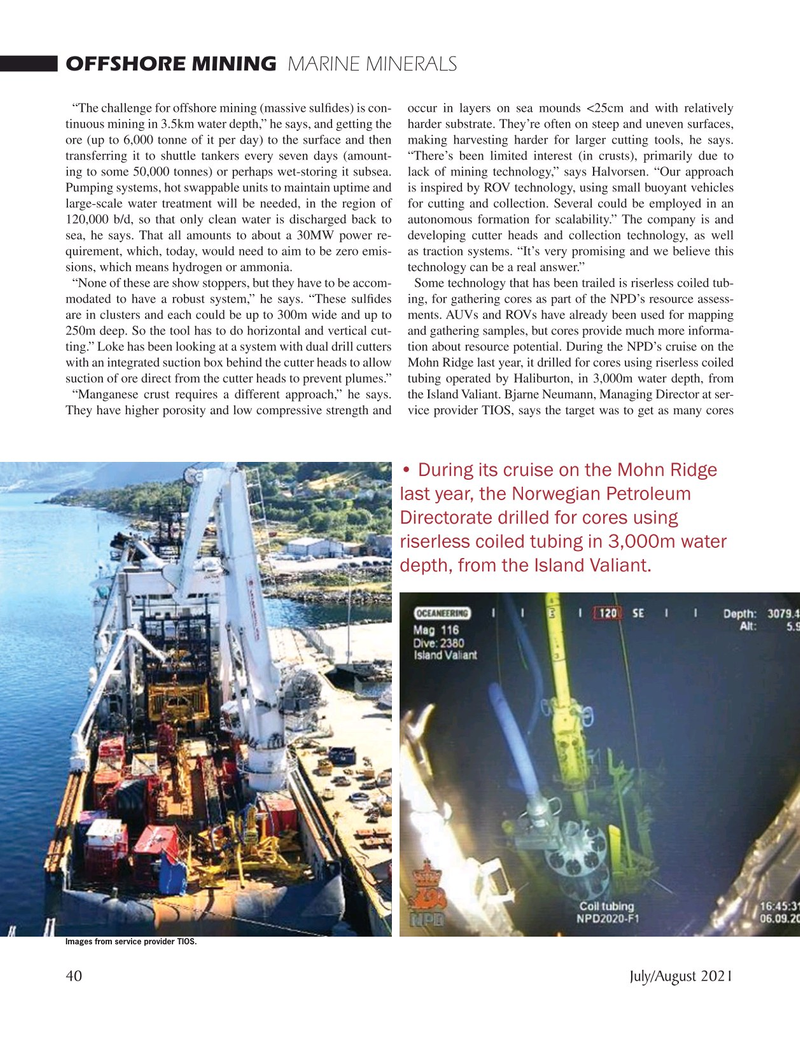 OFFSHORE MINING MARINE MINERALS “The challenge for offshore mining (massive sul? des) is con- occur in layers on sea mounds <25cm and with relatively tinuous mining in 3.5km water depth,” he says, and getting the harder substrate. They’re often on steep and uneven surfaces, ore (up to 6,000 tonne of it per day) to the surface and then making harvesting harder for larger cutting tools, he says. transferring it to shuttle tankers every seven days (amount- “There’s been limited interest (in crusts), primarily due to ing to some 50,000 tonnes) or perhaps wet-storing it subsea. lack of mining technology,” says Halvorsen. “Our approach

Pumping systems, hot swappable units to maintain uptime and is inspired by ROV technology, using small buoyant vehicles large-scale water treatment will be needed, in the region of for cutting and collection. Several could be employed in an 120,000 b/d, so that only clean water is discharged back to autonomous formation for scalability.” The company is and sea, he says. That all amounts to about a 30MW power re- developing cutter heads and collection technology, as well quirement, which, today, would need to aim to be zero emis- as traction systems. “It’s very promising and we believe this sions, which means hydrogen or ammonia. technology can be a real answer.” “None of these are show stoppers, but they have to be accom- Some technology that has been trailed is riserless coiled tub- modated to have a robust system,” he says. “These sul? des ing, for gathering cores as part of the NPD’s resource assess- are in clusters and each could be up to 300m wide and up to ments. AUVs and ROVs have already been used for mapping 250m deep. So the tool has to do horizontal and vertical cut- and gathering samples, but cores provide much more informa- ting.” Loke has been looking at a system with dual drill cutters tion about resource potential. During the NPD’s cruise on the with an integrated suction box behind the cutter heads to allow Mohn Ridge last year, it drilled for cores using riserless coiled suction of ore direct from the cutter heads to prevent plumes.” tubing operated by Haliburton, in 3,000m water depth, from “Manganese crust requires a different approach,” he says. the Island Valiant. Bjarne Neumann, Managing Director at ser-

They have higher porosity and low compressive strength and vice provider TIOS, says the target was to get as many cores • During its cruise on the Mohn Ridge last year, the Norwegian Petroleum