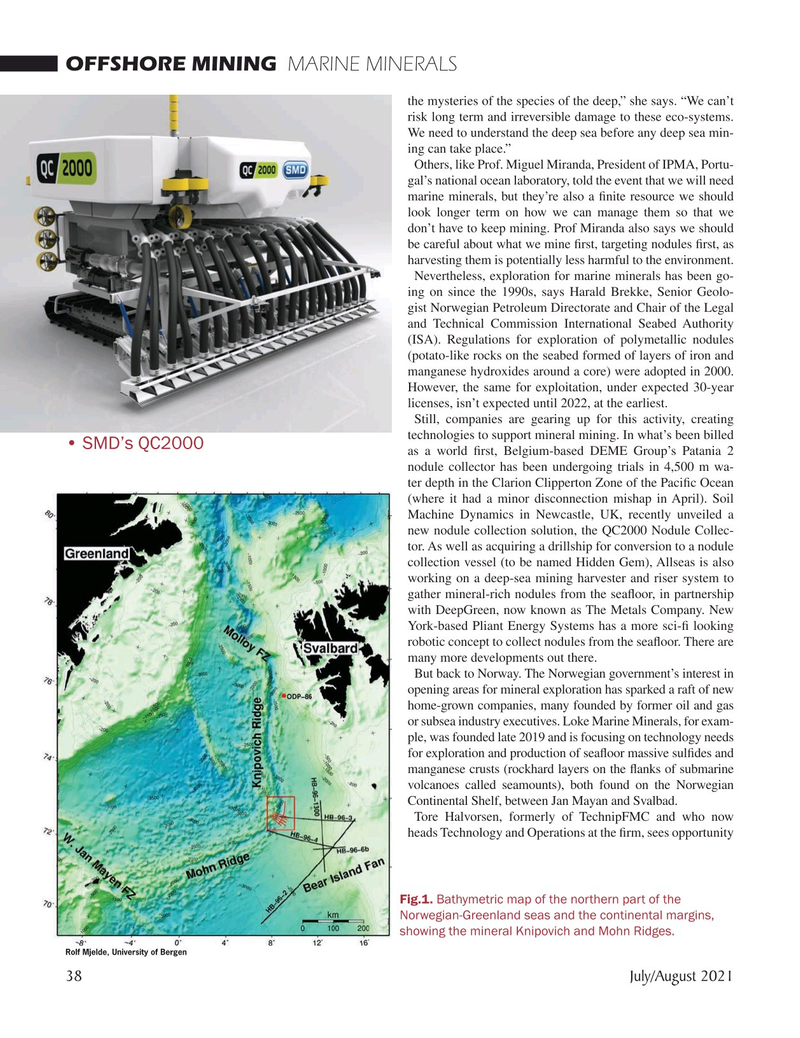 OFFSHORE MINING MARINE MINERALS the mysteries of the species of the deep,” she says. “We can’t risk long term and irreversible damage to these eco-systems.

We need to understand the deep sea before any deep sea min- ing can take place.”

Others, like Prof. Miguel Miranda, President of IPMA, Portu- gal’s national ocean laboratory, told the event that we will need marine minerals, but they’re also a ? nite resource we should look longer term on how we can manage them so that we don’t have to keep mining. Prof Miranda also says we should be careful about what we mine ? rst, targeting nodules ? rst, as harvesting them is potentially less harmful to the environment.

Nevertheless, exploration for marine minerals has been go- ing on since the 1990s, says Harald Brekke, Senior Geolo- gist Norwegian Petroleum Directorate and Chair of the Legal and Technical Commission International Seabed Authority (ISA). Regulations for exploration of polymetallic nodules (potato-like rocks on the seabed formed of layers of iron and manganese hydroxides around a core) were adopted in 2000.

However, the same for exploitation, under expected 30-year licenses, isn’t expected until 2022, at the earliest.

Still, companies are gearing up for this activity, creating technologies to support mineral mining. In what’s been billed • SMD’s QC2000 as a world ? rst, Belgium-based DEME Group’s Patania 2 nodule collector has been undergoing trials in 4,500 m wa- ter depth in the Clarion Clipperton Zone of the Paci? c Ocean (where it had a minor disconnection mishap in April). Soil

Machine Dynamics in Newcastle, UK, recently unveiled a new nodule collection solution, the QC2000 Nodule Collec- tor. As well as acquiring a drillship for conversion to a nodule collection vessel (to be named Hidden Gem), Allseas is also working on a deep-sea mining harvester and riser system to gather mineral-rich nodules from the sea? oor, in partnership with DeepGreen, now known as The Metals Company. New

York-based Pliant Energy Systems has a more sci-? looking robotic concept to collect nodules from the sea? oor. There are many more developments out there.

But back to Norway. The Norwegian government’s interest in opening areas for mineral exploration has sparked a raft of new home-grown companies, many founded by former oil and gas or subsea industry executives. Loke Marine Minerals, for exam- ple, was founded late 2019 and is focusing on technology needs for exploration and production of sea? oor massive sul? des and manganese crusts (rockhard layers on the ? anks of submarine volcanoes called seamounts), both found on the Norwegian

Tore Halvorsen, formerly of TechnipFMC and who now heads Technology and Operations at the ? rm, sees opportunity

Fig.1. Bathymetric map of the northern part of the

Norwegian-Greenland seas and the continental margins, showing the mineral Knipovich and Mohn Ridges.