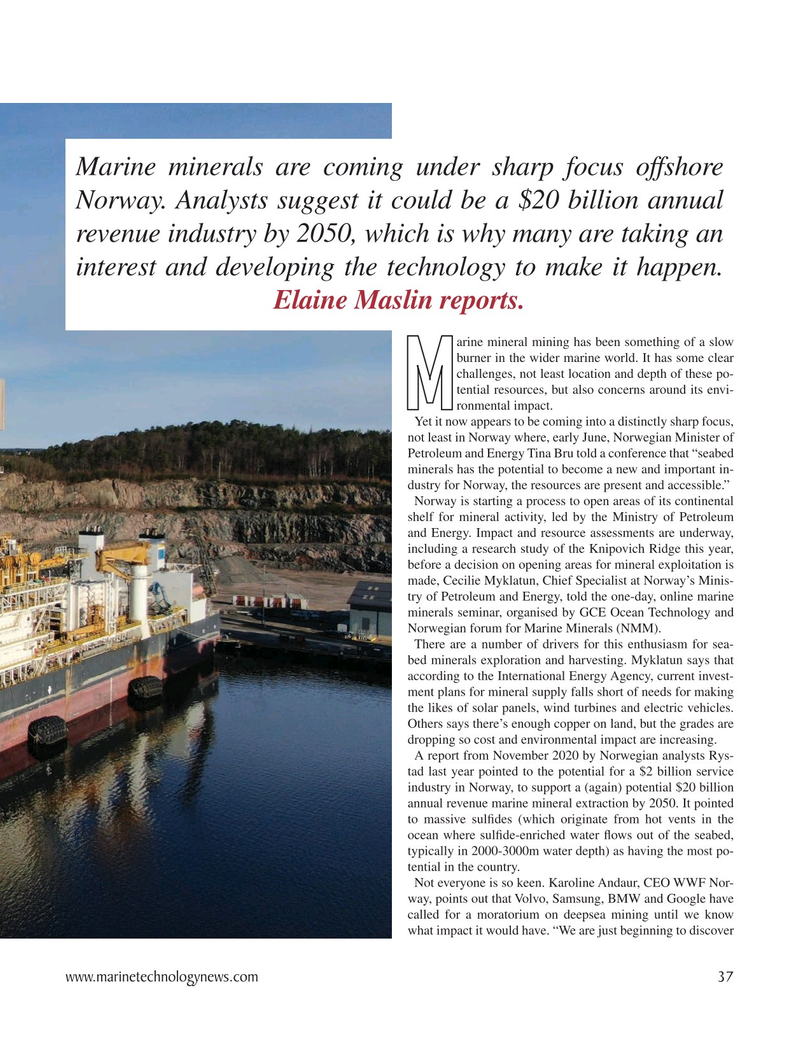 Norway. Analysts suggest it could be a $20 billion annual revenue industry by 2050, which is why many are taking an interest and developing the technology to make it happen.

arine mineral mining has been something of a slow burner in the wider marine world. It has some clear challenges, not least location and depth of these po- tential resources, but also concerns around its envi- ronmental impact.

Yet it now appears to be coming into a distinctly sharp focus, not least in Norway where, early June, Norwegian Minister of

Petroleum and Energy Tina Bru told a conference that “seabed minerals has the potential to become a new and important in- dustry for Norway, the resources are present and accessible.”

Norway is starting a process to open areas of its continental shelf for mineral activity, led by the Ministry of Petroleum and Energy. Impact and resource assessments are underway, including a research study of the Knipovich Ridge this year, before a decision on opening areas for mineral exploitation is made, Cecilie Myklatun, Chief Specialist at Norway’s Minis- try of Petroleum and Energy, told the one-day, online marine minerals seminar, organised by GCE Ocean Technology and

There are a number of drivers for this enthusiasm for sea- bed minerals exploration and harvesting. Myklatun says that according to the International Energy Agency, current invest- ment plans for mineral supply falls short of needs for making the likes of solar panels, wind turbines and electric vehicles.

Others says there’s enough copper on land, but the grades are dropping so cost and environmental impact are increasing.

A report from November 2020 by Norwegian analysts Rys- tad last year pointed to the potential for a $2 billion service industry in Norway, to support a (again) potential $20 billion annual revenue marine mineral extraction by 2050. It pointed to massive sul? des (which originate from hot vents in the ocean where sul? de-enriched water ? ows out of the seabed, typically in 2000-3000m water depth) as having the most po- tential in the country.

Not everyone is so keen. Karoline Andaur, CEO WWF Nor- way, points out that Volvo, Samsung, BMW and Google have called for a moratorium on deepsea mining until we know what impact it would have. “We are just beginning to discover www.marinetechnologynews.com 37