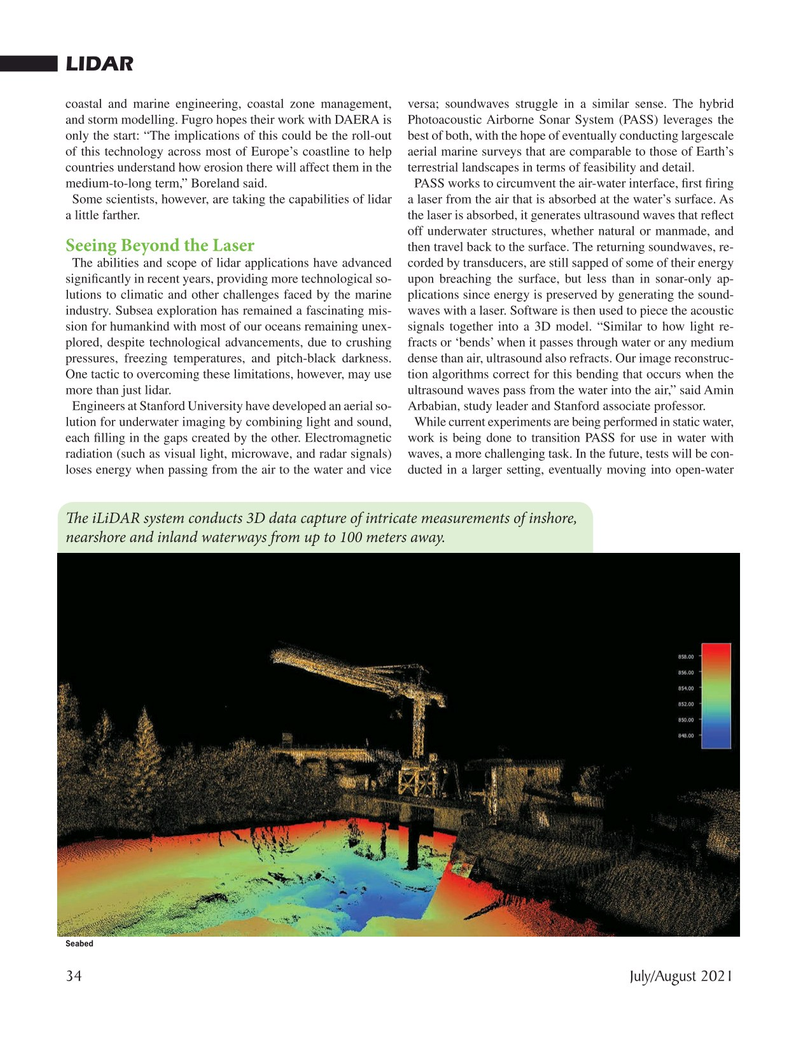 LIDAR coastal and marine engineering, coastal zone management, versa; soundwaves struggle in a similar sense. The hybrid and storm modelling. Fugro hopes their work with DAERA is Photoacoustic Airborne Sonar System (PASS) leverages the only the start: “The implications of this could be the roll-out best of both, with the hope of eventually conducting largescale of this technology across most of Europe’s coastline to help aerial marine surveys that are comparable to those of Earth’s countries understand how erosion there will affect them in the terrestrial landscapes in terms of feasibility and detail. medium-to-long term,” Boreland said. PASS works to circumvent the air-water interface, ? rst ? ring

Some scientists, however, are taking the capabilities of lidar a laser from the air that is absorbed at the water’s surface. As a little farther. the laser is absorbed, it generates ultrasound waves that re? ect off underwater structures, whether natural or manmade, and

Seeing Beyond the Laser then travel back to the surface. The returning soundwaves, re-

The abilities and scope of lidar applications have advanced corded by transducers, are still sapped of some of their energy signi? cantly in recent years, providing more technological so- upon breaching the surface, but less than in sonar-only ap- lutions to climatic and other challenges faced by the marine plications since energy is preserved by generating the sound- industry. Subsea exploration has remained a fascinating mis- waves with a laser. Software is then used to piece the acoustic sion for humankind with most of our oceans remaining unex- signals together into a 3D model. “Similar to how light re- plored, despite technological advancements, due to crushing fracts or ‘bends’ when it passes through water or any medium pressures, freezing temperatures, and pitch-black darkness. dense than air, ultrasound also refracts. Our image reconstruc-

One tactic to overcoming these limitations, however, may use tion algorithms correct for this bending that occurs when the more than just lidar. ultrasound waves pass from the water into the air,” said Amin

Engineers at Stanford University have developed an aerial so- Arbabian, study leader and Stanford associate professor. lution for underwater imaging by combining light and sound, While current experiments are being performed in static water, each ? lling in the gaps created by the other. Electromagnetic work is being done to transition PASS for use in water with radiation (such as visual light, microwave, and radar signals) waves, a more challenging task. In the future, tests will be con- loses energy when passing from the air to the water and vice ducted in a larger setting, eventually moving into open-water

T e iLiDAR system conducts 3D data capture of intricate measurements of inshore, nearshore and inland waterways from up to 100 meters away.