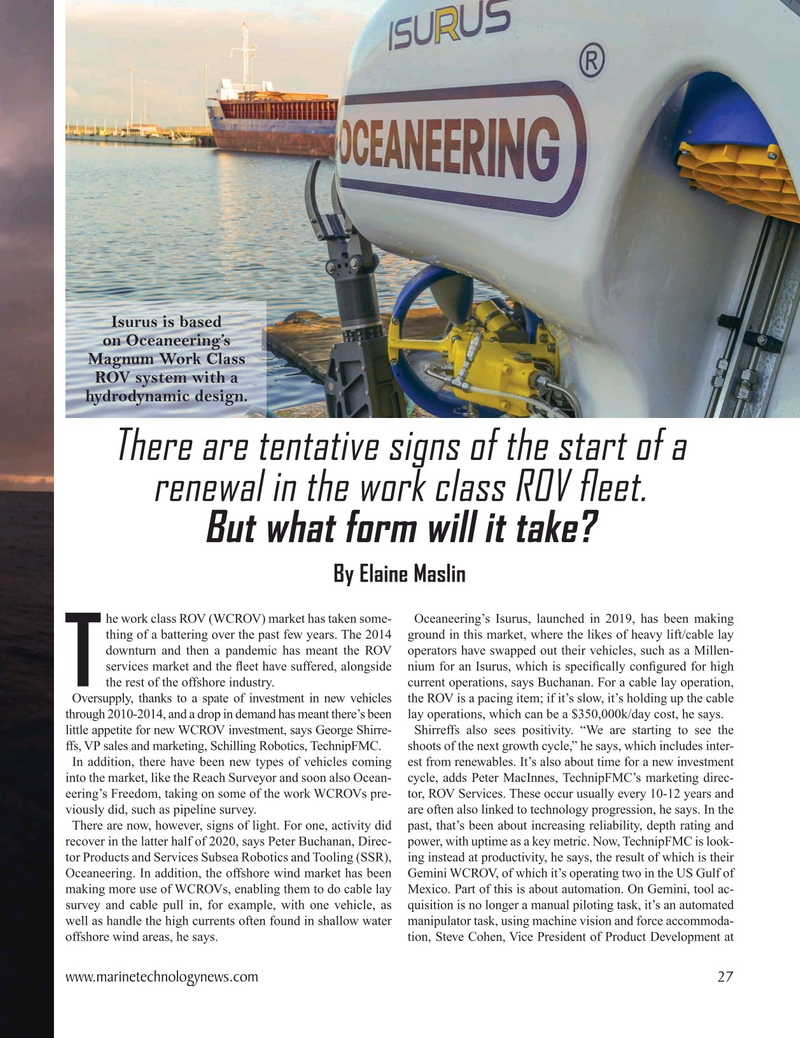 Isurus is based on Oceaneering’s

ROV system with a hydrodynamic design.

There are tentative signs of the start of a renewal in the work class ROV ? eet.

But what form will it take?

By Elaine Maslin he work class ROV (WCROV) market has taken some- Oceaneering’s Isurus, launched in 2019, has been making thing of a battering over the past few years. The 2014 ground in this market, where the likes of heavy lift/cable lay downturn and then a pandemic has meant the ROV operators have swapped out their vehicles, such as a Millen- services market and the ? eet have suffered, alongside nium for an Isurus, which is speci? cally con? gured for high

T the rest of the offshore industry. current operations, says Buchanan. For a cable lay operation,

Oversupply, thanks to a spate of investment in new vehicles the ROV is a pacing item; if it’s slow, it’s holding up the cable through 2010-2014, and a drop in demand has meant there’s been lay operations, which can be a $350,000k/day cost, he says.

In addition, there have been new types of vehicles coming est from renewables. It’s also about time for a new investment into the market, like the Reach Surveyor and soon also Ocean- cycle, adds Peter MacInnes, TechnipFMC’s marketing direc- eering’s Freedom, taking on some of the work WCROVs pre- tor, ROV Services. These occur usually every 10-12 years and viously did, such as pipeline survey. are often also linked to technology progression, he says. In the

There are now, however, signs of light. For one, activity did past, that’s been about increasing reliability, depth rating and recover in the latter half of 2020, says Peter Buchanan, Direc- power, with uptime as a key metric. Now, TechnipFMC is look- tor Products and Services Subsea Robotics and Tooling (SSR), ing instead at productivity, he says, the result of which is their

Oceaneering. In addition, the offshore wind market has been Gemini WCROV, of which it’s operating two in the US Gulf of making more use of WCROVs, enabling them to do cable lay Mexico. Part of this is about automation. On Gemini, tool ac- survey and cable pull in, for example, with one vehicle, as quisition is no longer a manual piloting task, it’s an automated well as handle the high currents often found in shallow water manipulator task, using machine vision and force accommoda- offshore wind areas, he says. tion, Steve Cohen, Vice President of Product Development at www.marinetechnologynews.com 27