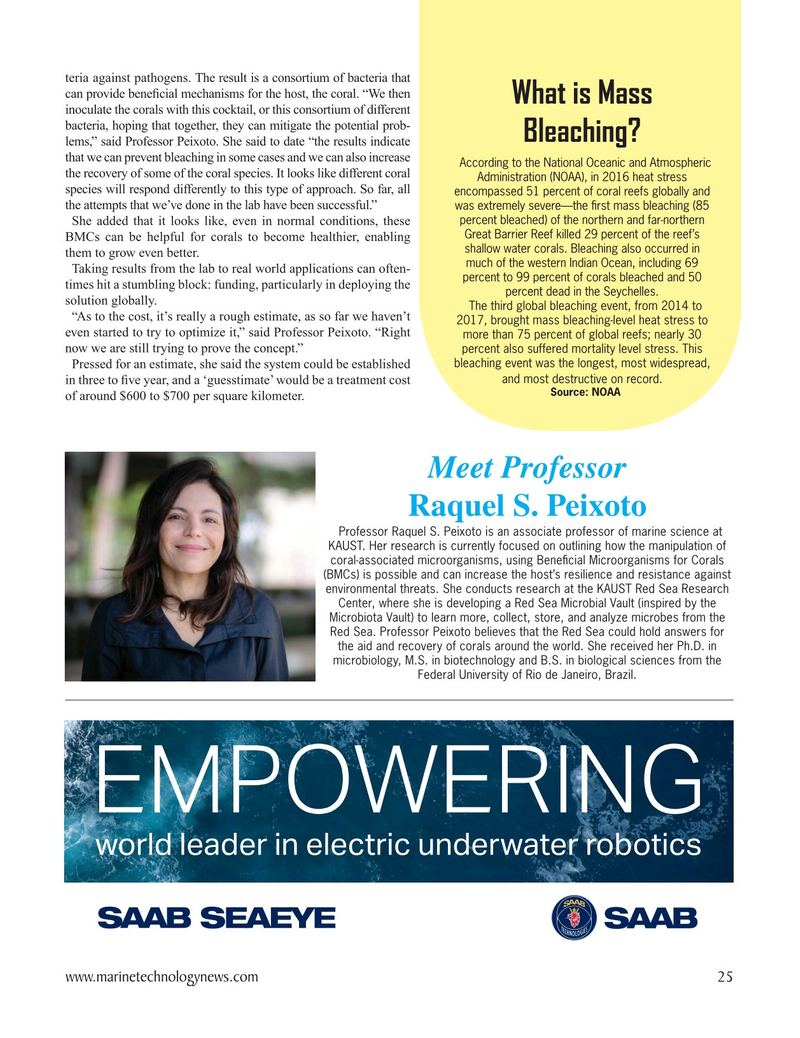 teria against pathogens. The result is a consortium of bacteria that can provide bene? cial mechanisms for the host, the coral. “We then

What is Mass inoculate the corals with this cocktail, or this consortium of different bacteria, hoping that together, they can mitigate the potential prob-

lems,” said Professor Peixoto. She said to date “the results indicate that we can prevent bleaching in some cases and we can also increase

According to the National Oceanic and Atmospheric the recovery of some of the coral species. It looks like different coral

Administration (NOAA), in 2016 heat stress species will respond differently to this type of approach. So far, all encompassed 51 percent of coral reefs globally and the attempts that we’ve done in the lab have been successful.” was extremely severe—the ? rst mass bleaching (85 percent bleached) of the northern and far-northern

She added that it looks like, even in normal conditions, these

BMCs can be helpful for corals to become healthier, enabling shallow water corals. Bleaching also occurred in them to grow even better. much of the western Indian Ocean, including 69

Taking results from the lab to real world applications can often- percent to 99 percent of corals bleached and 50 times hit a stumbling block: funding, particularly in deploying the percent dead in the Seychelles.

The third global bleaching event, from 2014 to “As to the cost, it’s really a rough estimate, as so far we haven’t 2017, brought mass bleaching-level heat stress to even started to try to optimize it,” said Professor Peixoto. “Right more than 75 percent of global reefs; nearly 30 now we are still trying to prove the concept.” percent also suffered mortality level stress. This bleaching event was the longest, most widespread,

Pressed for an estimate, she said the system could be established and most destructive on record.

in three to ? ve year, and a ‘guesstimate’ would be a treatment cost

Professor Raquel S. Peixoto is an associate professor of marine science at

KAUST. Her research is currently focused on outlining how the manipulation of coral-associated microorganisms, using Bene? cial Microorganisms for Corals (BMCs) is possible and can increase the host’s resilience and resistance against environmental threats. She conducts research at the KAUST Red Sea Research

Center, where she is developing a Red Sea Microbial Vault (inspired by the

Microbiota Vault) to learn more, collect, store, and analyze microbes from the

Red Sea. Professor Peixoto believes that the Red Sea could hold answers for the aid and recovery of corals around the world. She received her Ph.D. in microbiology, M.S. in biotechnology and B.S. in biological sciences from the