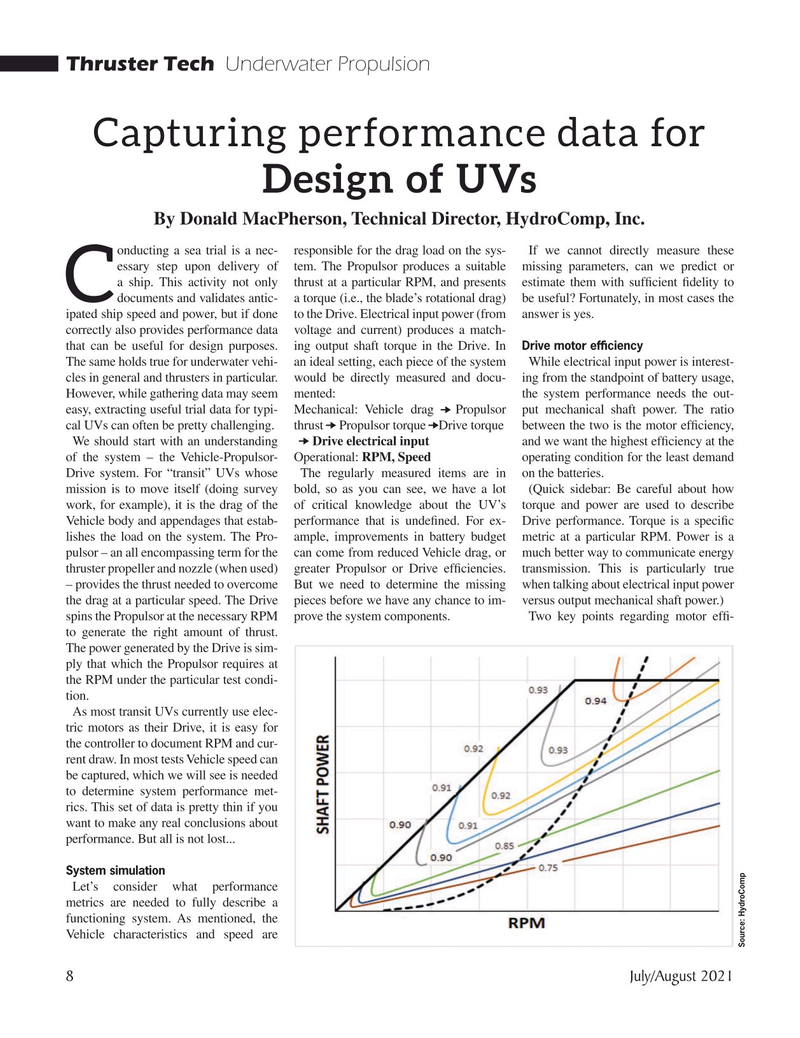 onducting a sea trial is a nec- responsible for the drag load on the sys- If we cannot directly measure these essary step upon delivery of tem. The Propulsor produces a suitable missing parameters, can we predict or a ship. This activity not only thrust at a particular RPM, and presents estimate them with suf? cient ? delity to

C documents and validates antic- a torque (i.e., the blade’s rotational drag) be useful? Fortunately, in most cases the ipated ship speed and power, but if done to the Drive. Electrical input power (from answer is yes.

correctly also provides performance data voltage and current) produces a match- that can be useful for design purposes. ing output shaft torque in the Drive. In Drive motor ef? ciency

The same holds true for underwater vehi- an ideal setting, each piece of the system While electrical input power is interest- cles in general and thrusters in particular. would be directly measured and docu- ing from the standpoint of battery usage,

We should start with an understanding Drive electrical input and we want the highest ef? ciency at the of the system – the Vehicle-Propulsor- Operational: RPM, Speed operating condition for the least demand

Drive system. For “transit” UVs whose The regularly measured items are in on the batteries.

mission is to move itself (doing survey bold, so as you can see, we have a lot (Quick sidebar: Be careful about how work, for example), it is the drag of the of critical knowledge about the UV’s torque and power are used to describe

Vehicle body and appendages that estab- performance that is unde? ned. For ex- Drive performance. Torque is a speci? c lishes the load on the system. The Pro- ample, improvements in battery budget metric at a particular RPM. Power is a pulsor – an all encompassing term for the can come from reduced Vehicle drag, or much better way to communicate energy thruster propeller and nozzle (when used) greater Propulsor or Drive ef? ciencies. transmission. This is particularly true – provides the thrust needed to overcome But we need to determine the missing when talking about electrical input power the drag at a particular speed. The Drive pieces before we have any chance to im- versus output mechanical shaft power.) spins the Propulsor at the necessary RPM prove the system components. Two key points regarding motor ef? - to generate the right amount of thrust.

The power generated by the Drive is sim- ply that which the Propulsor requires at the RPM under the particular test condi- tion.

As most transit UVs currently use elec- tric motors as their Drive, it is easy for the controller to document RPM and cur- rent draw. In most tests Vehicle speed can be captured, which we will see is needed to determine system performance met- rics. This set of data is pretty thin if you want to make any real conclusions about performance. But all is not lost...

Let’s consider what performance metrics are needed to fully describe a functioning system. As mentioned, the

Vehicle characteristics and speed are